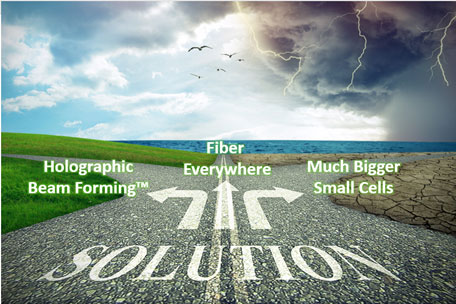 Mobile operators who are serious about deploying 5G have figured out that M-MIMO beamforming is simply uneconomical for fronthauling to small cells. That’s because M-MIMO generates gobs of data – most of them superficial – that must be processed somewhere. That somewhere is either at a centralized computing site connected to the small cell via fiber, or at the small site itself.

Outside of Asia, small cells will not be fiber-connected anytime soon, if ever. That leaves processing M-MIMO at the small cell. This option Pivotal would describe as high C-SWaP (cost, size, weight and power) because the BBU/RRU will be big, heavy, power-hungry and weather-proofed – all of which will make it not only very costly, but also very ugly (see “Tower Companies Cheer MIMO Antennas Because They’re Bigger and Heavier” -- https://www.fiercewireless.com/5g/tower-companies-cheer-mimo-antennas-because-they-re-bigger-and-heavier). Adding a little mobile edge-computing to support the likes of virtual and augmented reality and you raise its C-SWaP even more. And say good-bye to low-latency applications like autonomous driving that requires inter-cell interference coordination.

To review, the first way is to process everything centrally. The second way is to process on the edge. Both ways are prohibitively expensive. But there’s a third way: Holographic Beam Forming™ at every small cell.

Recall that M-MIMO beamforming processes data about everything around a subscriber, not just the information a subscriber wants to transmit or receive. M-MIMO requires multiple radio chains to do this -- one behind every antenna element -- and generates a lot of unneeded data. All this data require fiber transport to get processed centrally. Otherwise, it must be processed at the small cell.

On the other hand, because Holographic Beam Forming (HBF) uses advanced analog technology to move RF energy deterministically, it’s digitally sampling just the subscriber data, not the extraneous data of the world around the subscriber. It turns out that the multiple radios that M-MIMO throws at the problem are extraneous, too. HBF requires far fewer radios and so generates far less bit traffic on fronthaul links. More specifically, eight M-MIMO information streams in one 100 MHz channel generate about 300 Gbps of fronthaul traffic. Again, that much data requires multiple links of the most expensive fiber transport.

This is magic to mobile operators because 40 Gbps doesn’t require a fiber link. 40 Gbps can be transported by, say, half a 100Gbps Ethernet, four by 10Gbps Ethernet, 2-lanes of 25Gbps Ethernet, or by one of the new single-lane, “50Gbps” Ethernet standard. As we say at Pivotal, “HBF makes thin-pipe transports as valuable as fat ones.”

If you believe that 5G requires small cells and accept that connecting small cells to the C-RAN with fiber will take a long, long time – if ever – then you must conclude that all-digital M-MIMO is a non-starter for 5G. The better solution is analog beamforming in the radio head, and the analog beamformer with the lowest cost, size, weight and power (C-SWaP) for small cell deployments is Pivotal Commware’s Holographic Beam Forming.