Reducing 5G Deployment Cost Using Holographic Beam Forming Repeaters from Pivotal Commware showed that for a given polygon, using Pivot 5G repeaters could reduce the number of gNBs from 28 to 7. Fewer gNB sites results in lower costs and faster deployment, but another benefit of Pivots, in particular, is lower power consumption — 30W — thanks to Holographic Beam Forming® technology. Power consumption this low enables new siting solutions like solar poles, which, combined with Pivots, can side-step the ongoing 5G Street Light Fight between utility and wireless industries.

The 5G Street Light Fight pits wireless carriers who want low-cost, unfettered access to utility and street light poles to install small cells, against utilities and municipalities who have their own ideas about fees and about what defines a pole.  After all, many poles cannot support the weight of a small cell.  Pivotal is showing carriers and utilities that four-pound Pivots can not only reduce the number of small cells, but also attach where 100-pound small cells cannot.  What’s more, Pivots’ low power consumption makes sourcing solar power a practical option.

By practical I do not mean large solar panel arrays like those installed in New Jersey several years ago by Public Service Electric and Gas Company (Figure 1).  Many citizens regard these panels as “eyesores”. 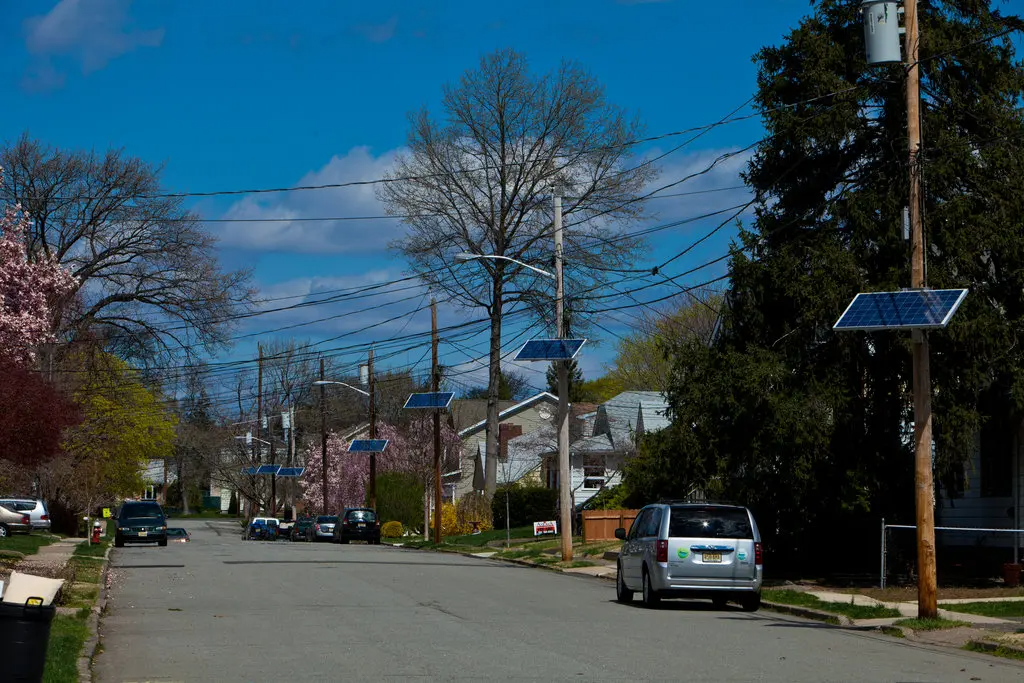 Instead, consider the more aesthetically appealing solar pole in Figure 2, which can support a luminaire along with other low-power, revenue-producing accessories like sensors, cameras, and Pivots.  All without trenching, cabling, and, of course, electricity.  Significantly, one solar “sleeve” can power a Pivot without sunlight for over 26 hours.